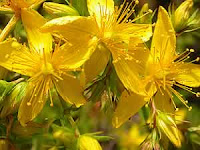 Pretty yellow flowers with a powerful effect, St John's Wort has been used as a mood enhancer from the ancient Greeks to modern doctors and was one one of the first (and few) herbs successfully licensed under the new EU Traditional Herbal Medicinal Products Directive (THMPD).

It is non-addictive and safer than prescriptive anti-depressants.


The flower tops are alchemised into teas, tablets, and concentrated capsules as well as liquid extracts and are widely used to help mild sleep disorders, depression and anxiety.

History
The plant, also known as Tipton's Weed, Chase-devil, or Klamath weed is a member of the  Hypericaceae family, and earned the more popular name of St John's Wort
(as in word not wart) as it flowers around the time of John the Baptist's festival
(San Juan) around midsummer, late June.

As a folk medicine the plant was revered for curing infections and healing wounds,
and scientific studies in the 50s and 70s found the active antibacterial substance,
hyperforin, proving our forefathers right.
Some manufacturer's claim to extract hyperforin from the flower to make strong anti-depressant tablets - but a quality St John's Wort will work just fine. Additional uses of St John's Wort include sedative, a soothing balm for burns and bites and as a malaria treatment.

Placebo?
Some clinical trials of St John's Wort have suggest that it doesn't work any better than placebo. Whereas other trials place it higher, and in line with stronger anti-depressant drugs. But placebo or not - if it works, it works.

According to Mind.org.uk, studies of the herb show that it increases the activity and prolongs the action of the brain chemicals serotonin and noradrenaline, in a similar manner to standard antidepressants, but with many fewer reported side effects.

Side effects
I have not experiences any side effects, but those reported include:
It is not recommended for pregnant or breastfeeding women - not because it is unsafe, but because there is no evidence to indicate the fetus or baby responds.

Personal Experience
I take St John's Wort when I'm feeling off kilter - during bouts of stress, maybe when I've had cash flow difficulties or am under work pressure,  deadlines and demands etc. I find it works quickly to soothe my nerves, so it doesn't fix problems but enables me to cope better.

I have found that it's good to let it rest, as I can quickly build up an intolerance, so I tend not to it for more than a month at a time, and usually just two or three weeks.

Where to buy it?
Your local health food store or visit Goodness Direct and remember you can chose between capsules, tea or tincture
Email ThisBlogThis!Share to TwitterShare to FacebookShare to Pinterest
Newer Post Older Post Home

Enter a keyword for relevant articles