Detox your body through your feet 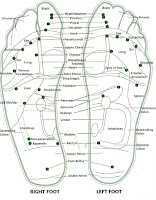 There are 7000 nerve endings and 60 acupuncture points in the soles of the feet. By drawing on the principles of Chinese medicine and reflexology, Detox Foot Patches work on the knowledge that the body can release toxins through the feet. The patches clear the meridian pathways so you detox while you are sleeping.

You simply stick these nifty little patches to the soles of your feet when you nod off and remove them when you wake up. The used patches will show a dark residue as a result of the evil toxins - but better out than in!

The resulting combination of these components is the production of negative ions, far infrared heat and the luring out of toxins.

What's a negative ion?
Found in the atmosphere, negative ions are good for you while conversely, positive ions are bad. Negative ions linger around beaches, mountains, lakes  - leaving us recharged after a visit to these sanctuaries. If they get inside our blood stream they increase our serotonin levels (happy endorphin) and help us relax and sleep more easily.

What's Far Infrared heat?
Found in the natural environment (from the sun) this thermal energy is warming, soothing and good for opening skin pores. The amount of tourmaline* is key in these patches as accumulated waste is drawn out under osmotic pressure from our blood and lymphatic systems, eliminating toxins.

My experience
I've used these twice now and after the first use the patches were disgustingly black as my body dumped its bad stuff. The subsequent patches were still heavy but less than the first. With each use the colour lightens, becoming less offensive, as your body clears out the dark stuff.

As weird and wonderful as these patches are, I believe that as our understanding of how the meridian lines function, and as we further comprehend the interconnected aspect of our whole being, we may just find that we become more content with natural products containing natural ingredients, making the need for ancillary products like these defunct. But until then, give them a go and get rid of your waste.

Enter a keyword for relevant articles